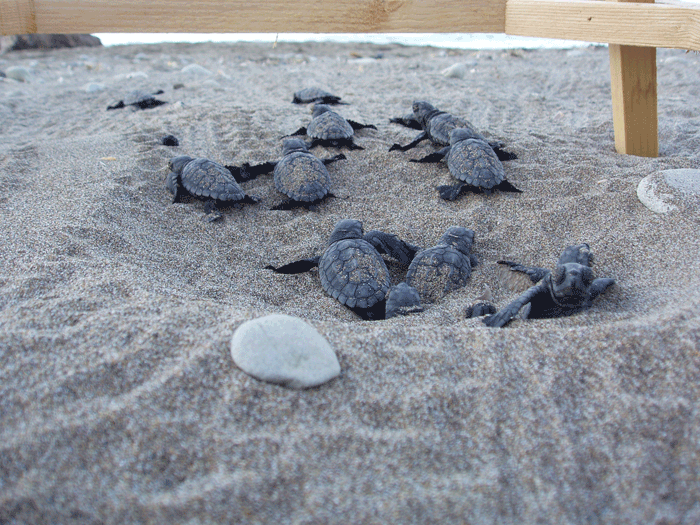 In addition to the lovely sandy beaches, crystal clear deep seas, and breathtaking sceneries, there is another reason to visit Kefalonia, especially if you’re a wildlife lover. And the reason for this is the island’s wildlife, which includes several endangered species. Loggerhead turtles are the only sea turtles that nest in Greece and the Mediterranean, and they are endangered.

You’ll see it swimming around the island’s beaches and the port of Argostoli, the Loggerhead sea turtle, one of the most fascinating creatures on the planet.

They are also called Caretta caretta and they are one of the world’s oldest species. Their huge heads, bronze shells, and amber skin set them apart from other turtle species. Loggerhead turtles reach a length of 1 to 1.2 meters, weigh up to 350 kilograms, and have a lifespan of 65 years or more.

Female turtles can nest as often as two to six times in one mating season, occurring mostly at night during the summer. They swim ashore on beaches and dig nests in the sand, where they lay their eggs, approximately 100 of them. It takes roughly 60-70 days for the eggs to hatch and the newborn turtles to emerge, which happens primarily at night when the chance of predator attack is minimal. Then, magnetized by moonlight and gravity, they are drawn into the ocean.

It is possible to find both Loggerheads and nesting sites on several beaches on the island, as Kefalonia is one of the most popular nesting sites in the world. Mounda Bay, between Skala and Katelios, is the island’s primary nesting ground, however many others may be seen on the island’s beaches, Megali Ammos and Ammes beach at Minies, Makris Gialos at Lassi or Mega Lakos at Lixouri. However, to witness an adult Loggerhead turtle in its natural habitat in Kefalonia, you may go to Koutavos Lagoon in the town of Argostoli. You may find them near the De Bosset Bridge and along the shoreline, where they occasionally accompany the fishing boats and swim about in search of food.

It’s worth noting that Kefalonia is home to another endangered species, the Monk Seal (or also known as Monachus monachus). In Europe, this species is regarded to be the most endangered, and it can only be found in the Mediterranean Sea.

Even catching a sight of such creatures is a remarkable experience. We must, as human beings, respect and care for them, as well as provide for their safety and well-being.

Admire them, but make sure you help them live safely and go along their journey on our planet.